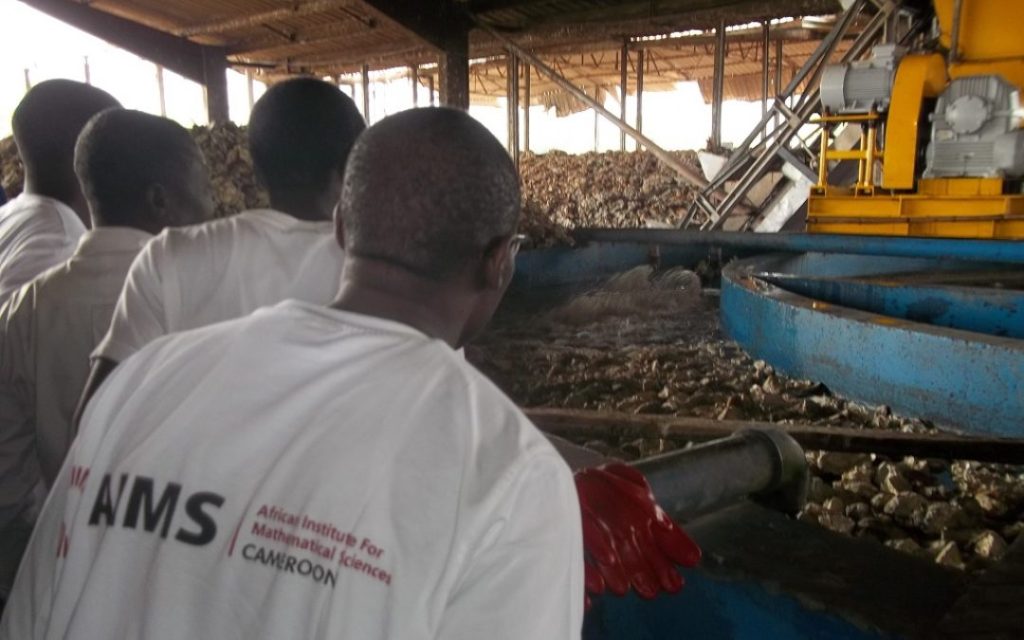 On 29 October 2015, the students of AIMS Cameroon visited the Cameroon Development Corporation (CDC). The Cameroon Development Corporation is an Agro-Industrial complex that mainly grows, processes, market locally and export semi-finished rubber, palm oil, palm kernel oil, oil palm, bananas, coconuts and tea. Formed in 1947 for the purpose of developing and running plantations of tropical crops in the country, the CDC is one of Cameroon’s major exporters. The parastatal organisation has a current share capital of 35,718,806,000 FCFA. The current General Manager, is Mr. Franklin Ngoni Njie. The organization is governed by a Board of Directors presided by a Chairman, Mr. Mutanga Itoe Benjamin. The corporation is made up of a workforce of over 22,036 employees, including temporary workers, making it one of the highest employer after the state of Cameroon.

The AIMS-Cameroon students visited the Tiko Rubber Factory and the Banana Pack House. In the Tiko Rubber Factory, the students were exposed to how rubber is obtained and processed for export. At the Banana Pack House, the students were enlightened on some of the activities involved in all the stages from planting banana seedlings to harvesting. One of the important aim for banana production was explained to students, which is to produce bananas that meet up with the GLOBALG.A.P. (Global Good Agricultural Practice) standards, which entailed a written guarantee that a production process or product meets laid down standards.

CAN MATHEMATICAL PROBLEM SOLVING SKILLS IMPROVE PROCESSES IN THE No.1 AGRIBUSINESS COMPANY IN CAMEROON?

During the visits, some factory problems requiring a mathematical solving approach were noticed. As AIMS-Cameroon students departed from there, they promise to look into the problems and provide mathematical solutions in no distance time. Those problems were as follows;

The main latex mixing tank and coagulation tanks were not being used due to:

So, on 15 January 2016, two AIMS-Cameroon students, two tutors, two lecturers, the Academic Director and the Admin and Outreach Officer returned to the Cameroon Development Corporation (CDC) Rubber Factory for a research on the latex production line concerning the problem that was identified when students visited the factory in October of 2015. As a result two students William Ngem Ngouana and Edwine Tendong aided by Dr. Michael Ndjinga from CEA-Saclay, France and lecturer at AIMS-Cameroon, Dr. Abdou Njifenjou, lecturer at the University of Douala, the Academic Director Prof Mama Foupouagnigni, two tutors Daniel Duviol Tcheutia and Jean-Daniel Djida were involved in looking into the problem. The tour of the factory was accompanied by two of CDC’s top executives, the Production Director and the Factory Engineer.

The initial production of latex is processed manually before it is sent to the production line for the final product.  If this problem is identified and solved it could increase production and maximize profit.

During this evaluation meeting the following objectives were highlighted: