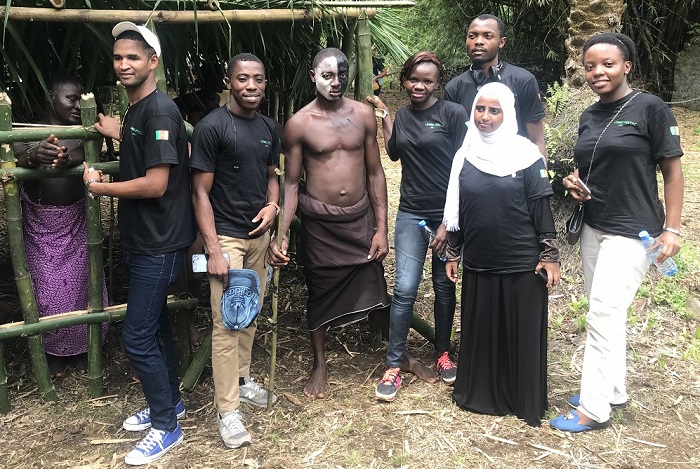 Slave trade may have lost its shine and sheen, but relics of this callous activity which saw the buying and selling of human beings like commodities can still be spotted in the classic city of Limbe, precisely in the village of Bimbia.

It is with this knowledge that AIMS Cameroon on April 11, firmly responded to an invitation to the Bimbia slave trade village, as part of 2019’s Festival of Arts and Culture (FESTAC), the 6th edition of an annual cultural jamboree organized by the Limbe City Council Government Delegate.

Joining a host of visitors from different works of life, Forty-Six(46)  students along with three(3) staff, Two(2) tutors and two(2) lecturers, made their way into the Bimbia slave site at 10 in the morning.

This site, known as one of the largest in Central Africa during the slave trade era, reveals some of the horrors of the Transatlantic Slave trade that covers a period of 350 years and has till date, maintained its naturalist look. Countries involved included the Portuguese, the Dutch, the Danes, the British, the Swedes, French and Germans.

In an opening speech, Mr. Charles Nname Manga, Deputy Mayor of the limbe III council, gladly welcomed all to the Limbe III sub division, referring to Bimbia as a place with lavished tourism potentials.

While hammering on the site’s history, he noted that, the essence is to understand the historic lesson of slave trading activities along the West Coast of Cameroon and to look back in time to correct the errors of yesterday for a better tomorrow.

The event was marked by an excellent drama piece, carefully put together to depict the capture, torture and sales of humans turned slaves by local ‘Bakweri’ rulers in exchange for liquor and gun powder from European slave buyers. Though in ruins, Vestiges of the over-a-century-old slave trade market were used to further tell the story.

The crowd was marveled  by a handful of historic elements such as the remnants of slave chains, the traced path from Dikolo mainland  to the departure point, huts where slaves were kept before taken off to the west, the exit beach and the Inspection, weighing and marking point of slaves.

Students of AIMS Cameroon at the end of the visit were glad to have had a chance to fathom what life was for a captured Cameroonian at the site and beyond, once they crossed ‘the door of no return’.